How To Determine Eye Dominance

Before I explain why eye dominance is important for compound bow shooters or archers in general let’s take a look at what it is after all and let me explain a few terms that are related to it.

What Is Eye Dominance

The definition of eye dominance goes like this: Eye dominance is the tendency to prefer visual input from one eye to the other – which basically means that one eye is more dominant than the other when it comes to receiving visual input. It is a bit like the laterality of left- or right-handedness with the difference that the dominant hand does not have to match the dominant eye. Eye dominance is also called ‘eye preference’, ‘eyedness’ or ‘ocular dominance’. Approximately one third of the population is left-eye dominant while two thirds have the right eye as their dominant one. A small group of people has no dominant eye at all.

In normal binocular vision the dominant eye is the one that matters for precise positional information which is extremely important for activities that require aim because usually you will use it for doing just that. Think shooting, archery or playing darts. That’s why the dominant eye ideally should match the dominant hand, otherwise you might get a problem with an effect called parallax.

What Is Parallax Effect

Parallax means displacement or difference of the apparent position of an object that is viewed along two different lines of sight and is measured by the semi-angle of inclination between those two lines (yeah, that sounded pretty scientific, I know …) . In other words it is an optical illusion of an object in relationship to its true location. To experience the parallax effect on your own do this:

Focus on an object in front of you with your raised thumb between yourself and the object with both eyes open. Now close your left eye. If the object moves to the right, you just experienced the parallax effect – apart from that, this means you are left-eye dominant as well. If the object moves to the left when closing your right eye while looking at it with your left one, you are right-eye dominant. If the object does not move at all when closing your left or right one, your eyes are equally strong without any dominance.
(image)
As parallax also affects optical instruments like rifle scopes or bow sights, choosing the compound bow to suit the eye dominance rather than the dominant hand can be of a big advantage to the archer as results can be a lot better later while shooting – at least that’s what the majority of archery experts recommend.

What Is Cross Eye Dominance

Why Is Eye Dominance Important

In archery you may have a competitive edge over your competitors if you shoot your compound or recurve bow on the same side as your dominant eye because that reduces the parallax effect to a minimum. Therefore an archer wants to have his eye as close to the arrow shaft and bowstring as possible. If you are cross-eye dominant you can compensate for the parallax effect with a lot of training and experience but if you are serious about target shooting or bowhunting you might consider retraining yourself, which means to re-learn shooting your bow with the hand that matches your dominant eye – that’s the general advice given.

You could, of course, wear glasses with an attached patch that supresses the sight of your dominant eye to avoid switching your bow hand but that is not the best option in my opinion. In my case the right eye is much weaker than my dominant left eye and it would be a pain for me having to aim with the weak one.

The question ‘why does eye dominance matter’ should be answered by now. The desicion which bow to buy (left- or right-handed) is another one. If you are just starting out it will be not too hard to learn to shoot with the left hand as a righty and vice versa if you are cross-eye dominant. It could get tough if you have been shooting for some years already, though. But that’s, of course, relative. It can take up to 1000 shots until you feel comfortable again or 5000 after switching hands. For me, that’s not an awful lot, and it would not keep me from trying if I wanted to.

Or you could train yourself to be able to deal with the greater degree of parallax that you have to face while shooting with cross-eye dominance. For doing so you have to train your non-dominant eye to focus on the target with the other one still receiving information (light and peripheral input) – which means shooting with both open. What you should not do is close one of them while shooting as this will cost you balance as you won’t receive all of the periphal input anymore.

In the end it is your decision if you want to (re-) learn to shoot with your strong hand lined up with your dominant eye or not. Both ways are possible but you may have to renounce a slight competitive advantage compared to a person that shoots with their dominant eye and hand lined up from the get go. At least that’s what you may hear from coaches and other experts. Truth is, that Korea has already sent archers with a cross-eye dominance to the Olympics that, believe it or not, won. So it seems to be possible to be competitive and successfull at an Olympic level with a cross-eye dominance as well.

For all the instinctive archers out there: I have a video by Jeff Kavanagh for you whom I appreciate a lot. He says that for instinctive archery, eye dominance does not matter at all as you shoot with both eyes open. As soon as you have to close one for aiming (gap shooting) it will, though.

How To Test Eye Dominance

Which eye dominance test to do really does not matter. They are all pretty easy and fast to execute. 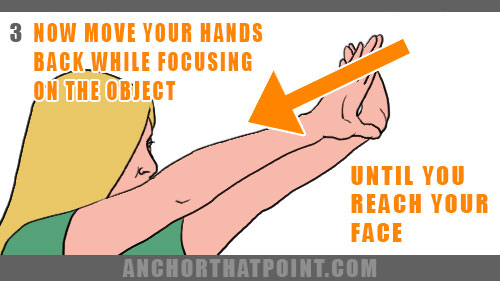 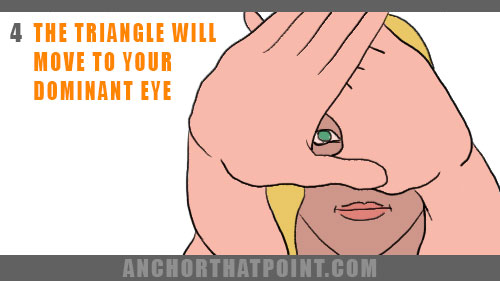 I hope I was able to explain to you how to determine eye dominance and why it might be important in a simple and easy to understand manner. The topic can get quite complicated when digging a bit deeper but as we don’t have to do that for our purpose, I tried to extract the important parts and leave out the rest.

Now that you have read the whole article I hope you understand why I cannot recommend or decide what’s best for you. It makes sense that you may shoot better with the dominant eye and hand being on the same side of your body, on the other hand there are archers that are damn successfull being cross-eye dominant. So I think good advice is – now that you know what ocular dominance actually is – to test what works best for you before you buy an expensive bow! Just go to a shop that has a shooting range or get a coach for some time. After you are sure about that, go get a good bow.