Welcome to this Nxt Generation Rapid Riser Compound Bow review! You might wonder how I stumbled upon this one? Well, a friend of mine was complaining that her son was too young to handle a Bear Archery Brave safely. He was not strong enought to pull the string back while keeping the arrow on target, which resulted in a few broken things inside her house. She wanted something more safe, so I decided to write the following review about a model that even a three year old could use safely. You don’t believe me? Well, in that case you need to read on!

First of all, I’d like to recommend to all parents that have no idea about compound bows so far to read my beginner’s guide about them here => Beginner’s Guide To Compound Bows.

The Nxt Generation Rapid Riser comes in an ambidextrous version, which means it can be used by right-handed and left handed young archers. The cams have no function and are there only for the looks – which makes this one a toy rather than a compound, but as it is meant to be used by very young children (3 – 5 years), that shouldn’t be a problem. 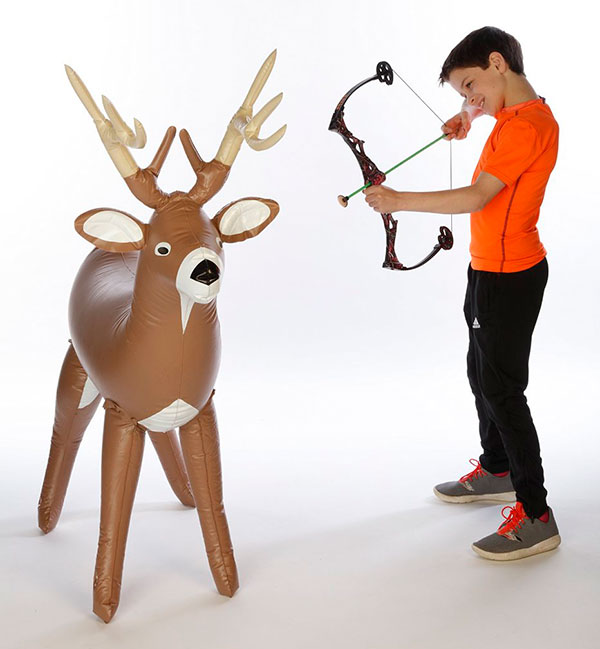 Apart from that, the arrows have no fletchings and tend to bend and break easily, so you might want to think about getting some additional suction cup arrows, to prevent yourself from seeing sad faces too soon.

Some parents stated that they used arrows with field tips as well, but then the safety aspect of this model is gone and you have to supervise your children all the time again! If your kid is strong enough to pull the string back, but keeping the arrow on the arrow rest at the same time is too hard for him or her, this one might be an option, though, because it has an arrow rest that will hold them securely in place all the time.

You will also get a Window Cling Target that can be attached to smooth surfaces like glass, windows, doors etc., so your kiddos have something to shoot at.

There is no quiver included. You could get the Velcro Quiver Kit (NXT-QK or NXT-VQK) but to be honest, I am not sure if that’s worth it. Young archers don’t use additional gimmicks like this too often and it is better to keep things simple for them in general.

There is also a version for girls available, that has a different color. Just click the image below to check it out! 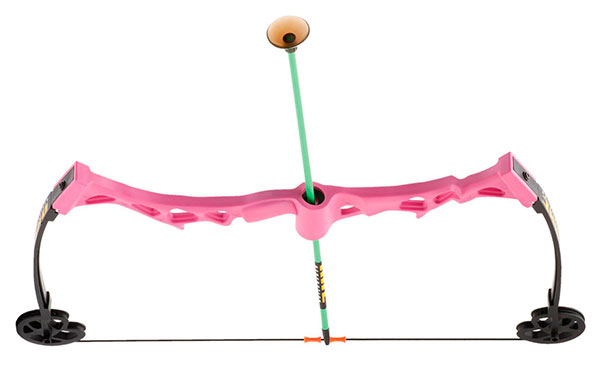 As this one is meant to be shot by very young children, noise level and hand shock won’t matter at all.

The bow itself looks pretty sturdy and durable, thus it should take a lot of beating from kids.

The rapid riser is designed as a shoot through model which is pretty cool for children that still struggle too much with keeping the arrow on the shelf while pulling the string back. There are a lot of models available with too small arrow rests at the moment, by the way. This one will keep the arrow where it should be – every time. 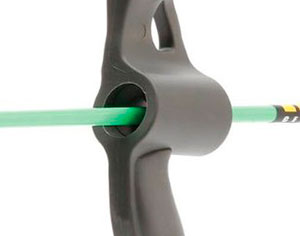 The Nxt Generation model is 19″ long and with a net weight of 1.4 lbs very lightweight. This fits its target audience, so they can carry it around for hours without getting tired too early because of its weight.

And one more time (because I found a lot of sad parents out there as well): The cams of this ‘compound’ are not functional. They are just there because it looks cool, just like daddy’s model. If you are looking for a real compound, check out the Bear Archery Brave, the Crosman Wildhorn or – if you have to spend some money – the Diamond Atomic.

The Nxt Generation Rapid model is pretty easy to use, even for very small children. The arrows slide through the hole in the rapid riser and are kept in place by two small pieces of rubber that stabilize it against the nocking point. This is just cool because your kiddos can concentrate on pulling back the string and aiming without struggling to keep the arrows in place, like I have mentioned above already. The wide nocks of the arrows are also good for the little ones, as those will make it easy for them to nock the arrows in. 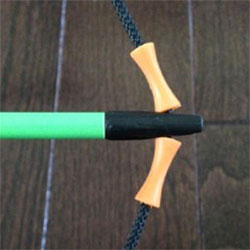 Kids can use this one for target practicing up to 10 yards. Longer distances make no sense, so I would keep the distances from 5 to 10 yards.

The draw weight is very easy. As it depends heavily on the draw length of your kid, it is not possible to give exact numbers, but assume it to be very low.

The draw length is maybe around 16-18 inches. In fact it depends on how far your kid pulls the string back, as there is no backstop. Just make sure they don’t pull it back farther than their chins, as this might damage this model.

Shooting Speed Of The Next Generation Rapid Riser Compound Bow

Again: This is meant to be shot by very young archers, so speed is not a criterion to judge if it is suitable for your kiddos or not.

It’s way too weak to hunt anything, as it won’t meet any of the minimum draw weight requirements of any state in the USA.

You cannot add a bowfishing reel to this one. Apart from that, it wouldn’t be strong enough for shooting through the water anyway.

At around 30 bucks, the Nxt Generation Rapid model is a very affordable and safe option to introduce your youngsters to the world of archery. You cannot do much wrong here. If you want to get the real thing or in case you want to spend more money, you could also take a look at the Bear Archery Scout or the Barnett Tomcat.

The Nxt Generation Rapid Riser Compound is recommended for ages 5 and up by the manufacturer. I would recommend it for children between 3 and 5 years. Older kids won’t be that amused about it however, as it is more a toy than a compound. For younger ones it makes a lot of sense, though, because it is also a very safe option to introduce your little ones to archery. As long as you stay with the suction cup arrows or the velcro tips, you cannot go much wrong.

If you are using arrows with field tips (which this model was not meant to be used with) you have to supervise your offspring all the time. Don’t forget that!

All in all, this one is a good option to teach your kiddos to handle a bow in a responsible and safe way without piercing anything or anyone. At the same time it will build some confidence and they will have a lot of fun while using it. They will outgrow it rather sooner than later, but for starting out and testing the waters this one is just great.