Welcome to this Trophy Ridge Pursuit Vertical Pin Bow Sight review!
This one is a very good option if you are on a budget and don’t want to spend an arm and a leg to get a decent bowsight. Beginners Especially will like this model as it will make their groups a lot tighter without breaking the bank completely. It is not top notch, though, but it can easily keep up with single pin sights that are a lot more expensive. All in all I would say it is a good compromise between quality and money. I hope you will get enough information out of this review to make your own decision about the Trophy Ridge Pursuit. See you at the end!

This bowsight can be used by right-handed and left-handed archers. You will need an Allen wrench to adjust it for right or left, but it takes only a few minutes to do so.

It can be adjusted along the 2nd and 3rd axis as well, which is pretty cool, as a lot of comparable sights don’t have this adjustability. The vertical adjustment can be done pretty quickly, while adjusting the windage takes a bit longer, because you need to loosen it with an Allen wrench and then you have to move the whole housing up or down manually (there is no micro adjustment available). There are no calibration marks for windage adjustment either, which makes it more like guessing most of the time.

The slider mechanism works smoothly and sighting it in is rather easy to do. It can take some time to get the ranges marked, though, but as soon as you are done with that it is dead on. And it is much easier to focus on one pin instead of three or five to be honest (okay, that’s really subjective and depending on your preferences, but… just saying). Another advantage is that you don’t have to fiddle around with a hex key to move all the pins around (been there, done that), but at the end of the day, that’s of course your personal decision. I like things simple, that’s why I like single pin bowsights as well.

If you want to learn more about sighting in a compound bow, feel free to read my guide about doing it here => How To Sight In A Compound Bow.

There is also a tape kit included and two instruction sheets (pink and yellow). One is for 20-40 yards, the other for 20-60 yards. In case you want to sight the Trophy Ridge Pursuit in for 20 to 40 yards, you need to put on the number tape first and sight it in at 20 and 40 yards. Then you take the numbers on the tape that are between these yardages. These will correspond with one of the yard tapes, which is the one you need to use.

Concerning the covered ranges of the tape kit: You can adjust it to however far you can accurately shoot your bow, which depends heavily on its draw weight. For example with a 50 lbs poundage compound, you can shoot up to 60 yards pretty accurately (that’s just an example and I bet there are a lot of better guys than me out there who can hit things a lot farther away 🙂 ). You would need more draw weight to shoot at 80 yard targets, of course. If trying to hit a target that‘s 80 yards away makes sense at all while bowhunting is another question, though.

There are no sight strips coming with this one, which is kinda downer. You could buy some HHA sight strips or you simply could use a sharpie to mark some yardages (20, 30, 40, …).

This model has an aluminum construction, which makles it quite sturdy and durable compared to some models that rely heavily on plastic. It has a built in sight level with 3rd axis adjustability and a rheostat light, but no magnification.

There is a lot of fiber optic wrapped around the housing, which means that it needs just a few minutes in the light to be able to glow bright for a while.

A rheostat sight light to light up the fibers in low-light situations is included as well. But you need to be very careful to not leave it on accidentally or it will run down the included battery quickly. In case you live in a state where it is not legal to use a battery operated light for bowhunting, you can take it off without using tools. Just unscrew and remove it. The light can be turned up as bright as you want, by the way.

The light works well in low-light situations. A customer stated that it was a tad short for him and that it was not easy for him to manipulate it with his fingers, because it screws in very tight to the sight housing.

The main negative is, though, that there are no sight tapes included, which forces you to buy some from a different company. Several customers stated that the HHA EZ Tape Kit is a very good option.

Another tip from a customer: The screw on the slider will scratch off the finish of your riser, if you back it out too much, so be carefull when doing so.

A few bowhunters stated that that the Trophy Ridge Pursuit tends to move, but the majority had no problems while using it.

The mounting bracket seems to be pretty solid and should fit all the compound bows with standardly tapped risers out there.

There are also spacers and screws included for mounting a quiver. The mounting hardware extends beyond the elevation arm, which is a good thing to have.

This one is available in a black finish only at the moment.

As it moves pretty quietly with no metal-to-metal contact and because it’s very quick and easy to change yardages while bowhunting, it is suitable for hunting. An argument against hunting with it is, that it has a dial in yardage which would make it hard to guess a moving target. On the other hand, who would shoot moving game?

A few pins surely would make it easier for hunting as you don’t have to take time for adjusting it, but after getting used to adjusting it, it works quite well.

At around 60 bucks you will get a very good entry-level bowsight that can keep up with models that cost twice as much if not more. You need to realize, though, that it is not a high-end top notch sight and that you have to take a compromise for the very affordable price point. You can also check out the TruGlo carbon hybrid 5 Pin. If you have more to spend, the Archer Xtreme Head Hunter 4-Pin Bow Sight would be a good option as well. 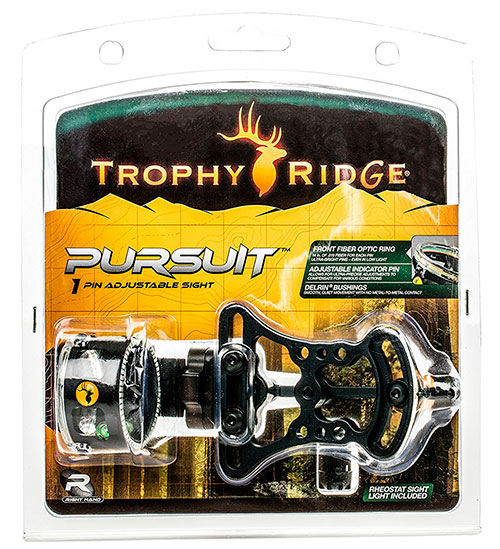 As I have mentioned before, the Trophy Ridge Pursuit is a good option for beginners and intermediate archers that are on a budget or don’t want to invest a lot of money in a new bowsight. It is a well constructed sight that seems to be on par with a lot of high quality models out there, that cost a lot more than this one.

It can be used for bowhunting and range shooting and seems to be – compared to other models in this price range – pretty sturdy and durable due to the aluminum construction. There are plastic parts, of course, but less than in similar models.

By the end of the day it is your decision, if this one is an option for you. If you don’t need to have the latest high-end sight and don’t want to spend 200 bucks, I really would recommend you check it out.